Lowestoft's first ever Summer Festival kicks off this Friday!

This exciting weekend of Summer activities has many events lined up and we have put together the below guide to make sure you do not miss out on some of the hidden gems of this weekend!

Come along to Royal Green in Lowestoft and take part in our Sports on The Green! We have a range of sports demonstrations, coaching from professionals all on a giant inflatable pitch on Lowestoft Royal Green. We even have a guest appearance and performance from the Great Britain Handball Team!

Their is something for all the family with bouncy castles, childrens entertainers and even some good ole fashion Seafront Donkey Rides!

Be part of history as Lowestoft Attempts to break the record for the most sandcastles built within one hour! Grab your buckets, spades, shovels, and head down to Lowestoft South beach to help be part of this exciting event!

Each sandcastle must measure 2ft x 2ft and have at least 4 turrets! Each castle will be inspected by an official adjudicator! So bring along your family, friends, neighbours, we need all hands to the deck for this one!

This fantastic event which has attracted bands, dance groups, local mascots and even a life size elephant puppet these wide range of moving displays will be walking along lowestoft seafront.

The seafront will be lined with people to try and catch a glimpse of these exciting displays! The parade will assemble in Kensington road and move off at 2pm to travel along the seafront and finally finishing on Royal Green!

People are also encouraged to take part in this event by dressing up in Fancy Dress and prizes will be given to the winners!

We need Businesses and Families to team up and make the most spectacular SandCastle. We are talking a castle that King Arthur would have been proud to call his home!

Don't fancy building a Sandcastle? We are also looking for the best Sand Sculpture! So grab your spades and the nearest architect and get yourself down Lowestoft Beach!

As well as these hidden gems we have the Lowestoft Street Velodrome, Heritage Ships open weekend, Car Rally, Model Aircraft display and much more...

So come along and lets help make the Lowestoft Summer Festival an Annual event in which we can all be proud to be a part of! 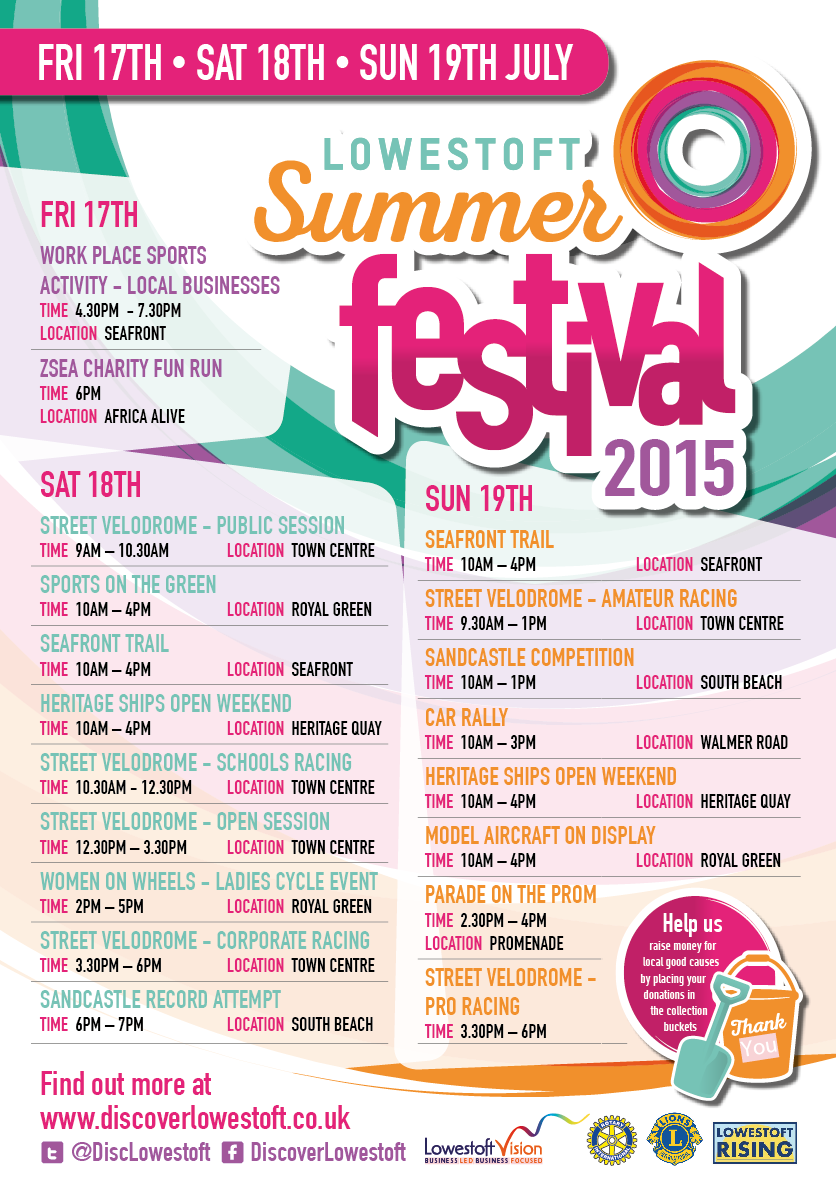